From Brenner to Santa Maria di Leuca, the virtual journey of a stone sett

It is a fact that porphyry from Trentino is present in every corner of Italy, from the Brenner pass to Santa Maria di Leuca. After all, in a virtual journey you could start from the highest mountain hut in Canazei or Cortina d’Ampezzo, cross the Venetian hills, reach the plain with the Sigurtà park in Valeggio sul Mincio, lap the shores of Garda or Como lakes, and go as far as the countless redevelopments of the seaside front from Caorle to Reggio Calabria; or even stroll through the streets of the center of Bologna or Ferrara, sip a glass of wine in Verona’s Piazza Bra, immerse yourself in the shopping arcades of Corso Vittorio Emanuele or Piazza San Babila in Milan, breathe history in the courtyard of the Arms of Castello Sforzesco. And in any case find inexorably a porphyry floor, specifically from Trentino Alto Adige, largely in its most classic format or in its variations, namely the sett.

Porphyry is often associated with the concept of eternity and recalled as a symbol of nobility and prestige, since in ancient times it was used for the creation of sculptures or sepulchral monuments and sarcophagi. Anyone visiting Venice, if only unconsciously will have had the opportunity to stumble upon the 4 purple porphyry tetrarchs located on the corner of the Basilica of San Marco. But that is the block porphyry of Egypt which has only the name in common with the porphyry of Trentino!

Trentino porphyry, a functionally perfect material and protagonist of the Italian urban decoration

Personally and provocatively I prefer to associate porphyry with the “68er” definition which identified a pavement in setts as “… an inexhaustible mine of bullets for the sling of the protest”. If only because the circumstance certifies that the material is widespread in the places for which it is physiologically intended, i.e. in the streets and squares. And fortunately today, thanks to the “standardized” laying procedures, it is not so easy to remove a sett from its seat.

Just as I would like to point out that the Trentino porphyry sett has nothing to do with what many call “bolognino” (30 x 45-100 cm solid concrete block, 12/16 cm thick), or even with the traditional Roman cobblestones, with an unmistakable pyramid trunk shape of 18 cm in height.

The economically significant history of Trentino porphyry took shape around the 1930s when the material was particularly appreciated for its exceptional physical-mechanical characteristics of resistance and strength: a functionally perfect material for paving urban streets, but also for the tank stations. Or for the mountain bends given the incomparable gift of anti-slipperiness, which for this reason has seen the use of the porphyry sett even in the famous “corners” of the Monza racetrack. 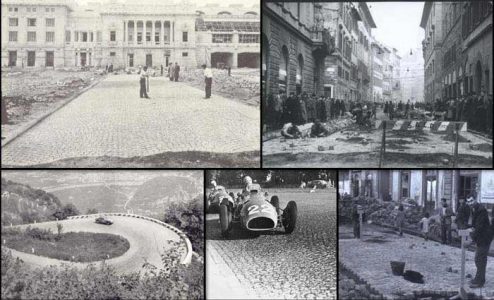 After all, the porphyry of Trentino has made its way among the paving stones also thanks to a copious quantity of manuals & handbooks that dictated rules and operating procedures progressively adapted to the evolution of times, vehicular traffic and related stresses. Curious to remember in this regard what was reported by an elderly paver, Roberto Giacobbi, who confirmed that “… in the early sixties in Rome it was necessary to redo via Nazionale in porphyry setts and we Roman pavers were not able to make the overlapping arches, so pavers came specifically from the Trento quarries … “. These rules and procedures have therefore been considered fully valid for the entire stone sector, so much so that today they find their natural place in the national technical standards, and particularly in UNI 11714-1.

Having said this, it is quite evident that many have almost made a habit of porphyry, because this deeply atypical material, which can be defined as the rough and strong brother of the most noble marble. However, Porphyry is a very flexible and versatile brother, which has always found an easy placement both in urban, suburban, residential and commercial environments with a very well-defined imprinting.

Also the famous Italian painter Fortunato Depero had noticed the porphyry. In 1937 he created a tapestry dedicated to this material, masterfully representing all its characteristics, in a brilliant manifesto that would still envy the most brilliant of marketing designers of these days. 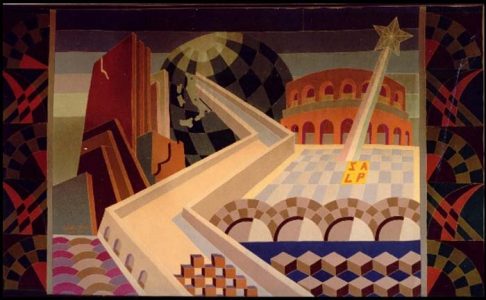 And if the transition of porphyry from “functional” material to “aesthetic” and undisputed protagonist of the Italian redevelopment and urban decor, for squares, historic centers and suburbs was very rapid, it is equally true that the role of porphyry from Trentino in a spontaneous symbiosis with the landscape in a broad sense has practically always existed.

The material was born and extracted in the Cembra Valley. The left side is the productive side with quarries. The opposite side is instead characterized by kilometers of dry stone walls and brickworks built with porphyry stones, in a network of terraces with slopes that are sometimes almost unsustainable, though able to contain a porphyritic soil mineralogically perfect for Muller Thurgau: mountain wine, symbol today of a viticulture defined “heroic”. 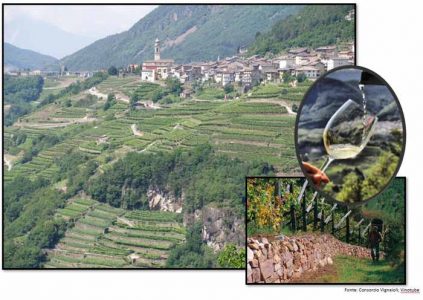 The Cembra valley and its heroic viticulture Wine & porphyry have always lived an indissoluble combination, not only in Trentino – South Tyrol where all the wineries express belonging to the territory also through the stone that best represents them. But wine & porphyry is a marriage that can easily be found also in the estates of Sicily, Romagna, Friuli – Venezia Giulia up to its sublimation with “Il Carapace” by Arnaldo Pomodoro in Montefalco (Perugia). 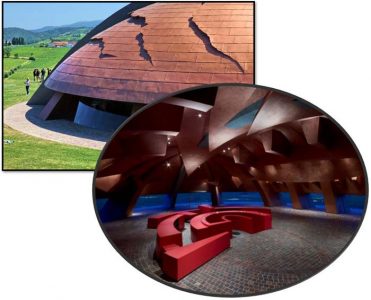 The Carapace of Arnaldo Pomodoro in Montefalco (PG)

The reasons for this widespread appreciation can be manifold. Personally, I just think that despite its atypical nature, porphyry is easy to read for any design, with the naturally split surface already fit as it is for the floor or wall without the need to transform or alter it. And yet the colors variety can be of immediate perception. As is said, from the producer to the consumer, i.e. from the quarry to the finished floor practically without going through the factory.

Precisely, with regard to the coloring of porphyry, at an exquisitely technical level, you can say that the material, being layered in variable thicknesses with great structural and chromatic mutability, is distinguished by different layings influenced by complex infiltrations and cracks, together with contaminations that come from the natural environment, with concretions and oxides penetrated in different shapes and quantities to make any chromatic uniformity impossible. This can be seen not only at a general level considering the extraction area in its entirety, but even within the individual extraction areas where differences and inhomogeneities can characterize an extraction level from the other.

Translated at a more practical level, this means trivially that in terms of coloring of Trentino porphyry there are non-dominant chromatic varieties that range from gray, to violet gray, from red to violet to bright rust with the peculiarity that often the pigments that distinguish a type of coloring are present simultaneously in differentiated percentages also in all or part of the others. With the advantage that the designer can exploit the colors available with the same approach as a painter through his color palette. And give life to sober and balanced floors, almost neutral, or on the contrary solutions and bright tones in full contrast with the existing buildings. In any case, porphyry colours can be considered an extra tool to create combinations for the enhancement of the other stones.

This, and much more, is Trentino porphyry.

Did you find what you were looking for?

If you need more info, do not hesitate and contact us